A blog exploring the intersection of humanity and technology.
Date: 23 Nov 2009
By: Jennifer Kane

Tweetwalls: The Good, The Bad and The "Yo Mama is Soooo Ugly…"

Ladies and gentlemen, I introduce to you: The Tweetwall – the hottest new accessory for events in the digital age.

If you haven’t seen one yet, give it time. They’re quickly becoming ubiquitous. 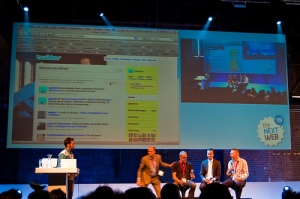 (How ubiquitous? How about the fact that you can now tweet prayers to appear in an aggregated feed for the Church of the Holy Sepulchre?)

For those of you who are new to the concept, a Tweetwall is a projection of an aggregated; auto-refreshing conversational feed, that’s often occurring simultaneously as a real-time event or gathering.

As an events tool, Tweetwalls make a lot of sense.

Increasingly events have “back channel” conversations that are equally as compelling as the “front channel” ones. Incorporating a Tweetwall into the experience allows you to marry these on-line and offline conversations and connections.

Additionally, live streaming, social networking and virtual reality have begun to blur the distinction between being virtually present at an events and actually being there in the flesh. A Tweetwall is an excellent way to give your virtual friends a seat at the table too.

But, like any other technology advancement, there is a wrong and a right way to use a Tweetwall.

Before you jump in, here are some tips to help you avoid making any rookie mistakes.

Tweeters + Speakers = Not a Match Made in Heaven

The first exposure most of us have with Tweetwalls are at conferences or workshops where the feed is being projected behind a live presenter.

At first glance, this seems like a natural and smart move.

But as one who’s coordinated, watched and presented in front of Tweetwalls for over a year, let me be explicitly clear on one thing. In my opinion…

Tweetwalls do not belong behind presenters.

It’s an ineffective logistics choice from many perspectives:

Good Places for a Tweetwall


Make no mistake, I think that Tweetwalls belong at events…just not behind the speakers.

So what’s a better way to use them?

No matter what format you choose, just make sure your Tweetwall strategy is a solid one:

You don’t have to do all this leg work yourselves. My friends at Clockwork Active Media Systems recently build a new tool called tweetwally that can do a lot of this work for you. I highly recommend checking it out.

It’s tempting to think of Tweetwalls in one-off terms: you build it, post it and then shut it down when the event is over.

But the reality is that your Tweetwall feed is full of valuable content that will continue to live online long after your event has been put to pasture.

So give some thought to how you can mine and capitalize on this content:

Tweetwalls are undeniably cool. And I believe they signal the beginning of a natural evolution to a future where events will have indistinguishable on and offline experience.

Just be sure to use them strategically.

Virtual sticks and stones also break no bones, but a mismanaged Tweetwall can certainly hurt you.

*Sadly, this is an actual tweet I saw displayed during someone’s presentation.